Economic growth hides the reality of households under pressure

As we headed into 2019, I wrote that “the RBA is still hanging onto hope as its primary policy tool. It continues to signal that the next move in rates will be up”. But I also highlighted that in its words, it was clearly reassessing that outlook for interest rates because of the uncertainty around households and consumption as a result of low- income growth, high debt levels, and house price falls.

Furthermore, I noted that “the message they [the RBA] are trying to get out is things will be okay. But if they are not, they will move to adjust policy in a pragmatic way to stabilise the economy”. So, it’s no surprise they have cut rates recently to a record low of 1.25% and that Governor Lowe is signalling more rate cuts are to come. Of course they are still trying to play the glass half full card by saying the overall economy here in Australia is still doing okay, and that the rate cuts are as a result of employment being able to fall further before it will cause inflation which has been lacking here in Australia, and around the globe, for a few years now. 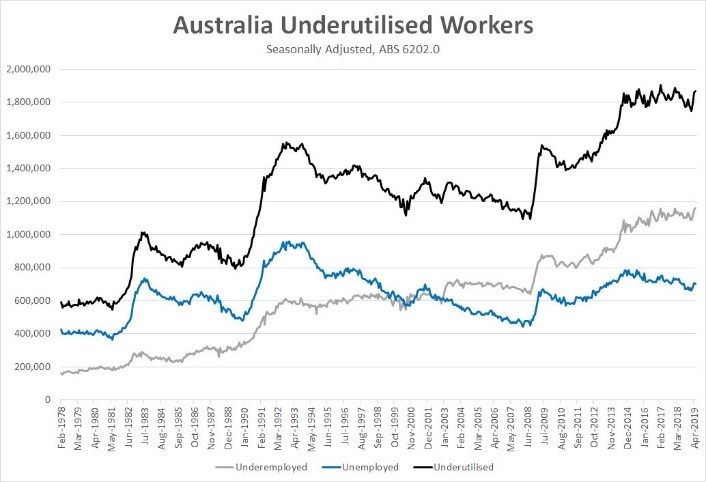 Indeed, late to the party that they could run the economy hotter, the Reserve Bank board did finally get there in the end and Governor Lowe this month said that the unemployment data does “not suggest we are making any inroads into the economy’s spare capacity.”

As a result,  he went on to say, “It is not unrealistic to expect a further reduction in the cash rate as the board seeks to wind back spare capacity in the economy and deliver inflation outcomes in line with the medium-term target…It would be unrealistic to expect that lowering interest rates by 0.25 of a percentage point will materially shift the path we look to be on”.

The RBA has given a real sense that unemployment needs to fall to, or below, 4.5% nationally for the RBA to become satisfied. As a result, many Banks now see RBA cash rates at 0.75% by later this year. "Most analysts, ourselves included, say that after getting to that point the RBA will reach for the ‘unconventional’ policy tool kit," ANZ's David Plank said.

That’s something that RBA Governor Lowe said was unlikely. However, as recently as late January this year, RBA Board member, Ian Harper, was still saying rates were going up next – so let’s agree to never say never.

For years now Governor Lowe, the RBA more broadly, and other central banks have been saying that monetary policy alone is not enough to get the global economy going again.

In June, Lowe reiterated his earlier calls for governments to increase fiscal spending and structural reforms to help boost employment growth. "As a country we should also be looking at other ways to get closer to full employment. One option is fiscal policy, including through spending on infrastructure," he said.

Later in the month Lowe highlighted that governments all over the globe “should have their top drawers full with ideas”, and here at home, he suggested that with the Australian government’s 10 year bond rate at around 1.30%, they should borrow to fund more spending because “there must be projects out there with a risk adjusted return of more than 2 per cent”.

Lowe also urged “structural policies that support firms expanding, investing, innovating and employing people“ are also important. Given recent news the Morrison government is looking to cut red tape and reform industrial relations in an effort to, as the prime Minister put it, “provoke the much needed ‘animal spirits’ in our economy”, that is important.

That folks, is very ‘RBA language’, with previous Governor Glenn Stevens, using that phrase consistently during his tenure at the bank.

So, the economy is challenging but there is cause for hope

The Westpac consumer sentiment release in June didn’t show the bounce in confidence that Westpac Chief Economist, Bill Evans, though it might. Rather, there was a small dip in confidence during the month overall. Australians have become a little more fearful of losing their jobs, though they did say it is a better time to buy a house.

That more upbeat outlook toward housing has manifested in stronger auction clearance rates across the big capitals suggesting the worst of the house price falls may be behind us. Though, as yet, house prices haven’t materially picked up.

Whether or not they do will depend on the very thing the RBA is targeting – jobs growth and unemployment. If the NAB business survey is any guide, then the bounce in confidence is welcome, but the relative weakness in conditions, trading, profitability, and employment sub-indexes helps explain why consumers are a little more fearful of losing their jobs – these are the very businesses in which they work.

The Reserve Bank cutting rates is not for nothing, but it is hoping that this is simply a matter of economic course correction, not an economic slowdown that will plunge Australia toward its first recession in nearly 30 years. At the moment, house price stabilisation and unemployment are the key indicators to watch.

Inflation will remain low and growth relatively weak for a few years, whatever the outcome.