In client reviews, one of the most frequent questions we get asked is what we think of AfterPay and is it in the portfolios? Over the past two years AfterPay has been the top-performing stock on the ASX, up 550% despite numerous equity raisings and insider selling; proving the doubters wrong (so far). Indeed, AfterPay is no longer a small technology stock that can safely be ignored by fund managers.

The company currently has a market capitalisation of $19 billion and is the 18th largest listed company in Australia, valued more highly than blue-chip stocks such as Brambles, Ramsay Healthcare and the ASX.  An impressive achievement for a company that is yet to make a profit and was only listed in June 2017! In this piece, we are going to look at this beloved stock’s business model, how it is valued and our (currently incorrect) investment thesis.

AfterPay is a consumer finance company, providing short-term unsecured loans allowing consumers to spread payments for a purchase over four instalments over eight weeks. AfterPay makes money by charging the retailer selling the goods bought on AfterPay between 3-7% of the purchase price, with AfterPay taking on the credit risk that the customer won’t pay, this charge represents around 80% of AfterPay’s revenue. AfterPay’s service is viewed as attractive to retailers as it is seen to drive additional sales, by reducing the initial purchase payment and expanding their customer base to consumers that might not have access to a credit card.

If the AfterPay customer misses a payment, they incur a fixed late fee that ranges between $10 and $68 depending on the size of the purchase and then the defaulting customer can no longer use AfterPay to buy more goods.  Late fees represent approximately 20% of AfterPay’s revenues. The fixed late fee differentiates AfterPay from other consumer finance companies that charge interest based on the size of the balance outstanding and are thus incentivised for their customers to run up their debts.

While valued as a tech company on 40 times revenue, AfterPay like all Buy Now Pay Later (BNPL) stocks are capital intensive rather than “capital lite”. When AfterPay adds a new customer, who then buys a pair of Ugg boots for $200, AfterPay increases its receivables loan book which has to be funded, reducing free cash flow generation.

This is a very different situation to more traditional tech companies such as Xero or Microsoft, where the marginal cost of adding another customer downloading application software is close to zero. Thus, growth for AfterPay is capital intensive and assumes that the company’s bankers will always be sympathetic and that capital markets will always be open, an assumption that proved to be incorrect in 2008 during the GFC.

AfterPay’s receivables book is expected to grow from $800 million to $2 billion over the next two years.  The capital-intensive nature of AfterPay’s business model has seen the company conduct capital raisings every year for the past three years diluting previous investors, but this makes the company a profitable client for their investment bankers!

The fixed late fee also allows AfterPay and other Buy Now Pay Later (BNPL) companies to avoid being regulated by the National Consumer Credit Protection Act, which requires regulated lenders to comply with the Act’s responsible lending obligations which include credit checks and verifying a client’s income and creditworthiness.

Low levels of regulation in Australia currently provides AfterPay with a competitive advantage, due to lower compliance costs though this may not be a permanent state of affairs. In March 2020 AfterPay was required to refund late fees charged to Californians after California’s financial regulator deemed that the company was giving out credit without a license, AfterPay now has a Californian credit licence.

We are generally wary of investing in companies whose business model depends on favourable government regulation, as this can change with minimal warning. In 2007 changes to the tax treatment of agricultural managed investment schemes (MIS) swiftly resulted in the demise of the entire MIS sector (Timbercorp, Great Southern etc.) which were previously valued at several billion dollars.

As AfterPay does not currently generate any profits and is only expected to do so in 2022 if revenues increase by 150%, it is a difficult stock to value using any conventional valuation methodologies that rely on profits, dividends or assets. Some analysts have sought to value AfterPay on a revenue multiple (currently AfterPay trades at 40 times revenue), but this is similar to how the dot.com stocks were valued in 2000. Unlike earnings, there is a minimal link between a company’s revenue and the dividends it can distribute to its shareholders.

However, what an investor can do is to see the level of long-term sustained growth that a company’s share price implies. In the below chart we have used the expected earnings per share for AfterPay over the next three years (which look very optimistic) and then solved for the compound growth rate required between the ten years 2024 to 2033 to justify a share price of $75. Over this period, AfterPay has to grow earnings per share at a compound rate of 14.9% to 2033, increasing earnings per share from zero to $10.50.

Any long-term compound growth rate of over ten percent should be viewed with suspicion, as since 1900 globally only one company – Microsoft has achieved this benchmark between 1990 and 2000 capitalising on the adoption of desktop computers globally and monopolies on critical software such as Microsoft Office and Windows. It is tough to make the case that AfterPay is likely to enjoy the same growth trajectory for its oft-copied payment-splitting solution. Also as discussed above, unlike Microsoft, high growth for AfterPay will require continual capital raisings, diluting earnings and making it very hard for the company to sustain double-digit earnings per share growth well into the 2030s.

Our Take: A Bird in the Hand is Worth Two in the Bush

Currently, the entire BNPL sector on the ASX is valued at over $23 billion and is expected to generate a net loss of -$159 million over the next year. For roughly the same amount, an investor could own the largest packing manufacturer in the world (Amcor), one of the most efficient electrical goods retailers on earth (JB Hi-Fi) and the power distribution systems in South Australia and Victoria (Spark Infrastructure) which enjoy a regulated return. 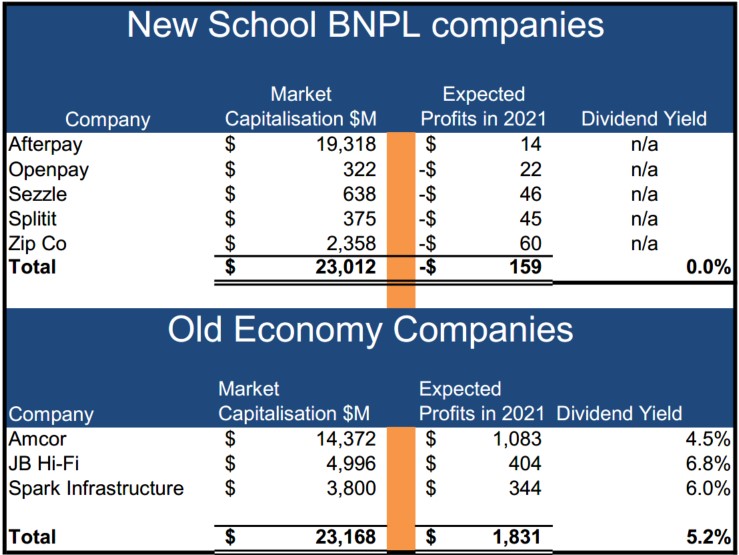 These three companies (which we own in the Maxim Atlas portfolio) are expected to generate net profits after tax of $1.8 billion and pay a healthy dividend yield of over 5%. While these three old economy stocks don’t have the blue sky and sizzle of the BNPL sector, these are also companies that have been around through a range of market conditions good and bad (Amcor was founded in 1926, JB HiFi in 1974 and Spark in 2005). Additionally, they offer steady dividends to our investors.

Conversely, AfterPay was founded in 2014 and has only been listed for three years on the stock exchange and has only seen benign conditions in its short lifetime. While not owning AfterPay has hurt performance when compared against the ASX200 index, we are wary of committing our client’s capital to an extremely over-valued company that faces several risks that are currently being ignored by the market.